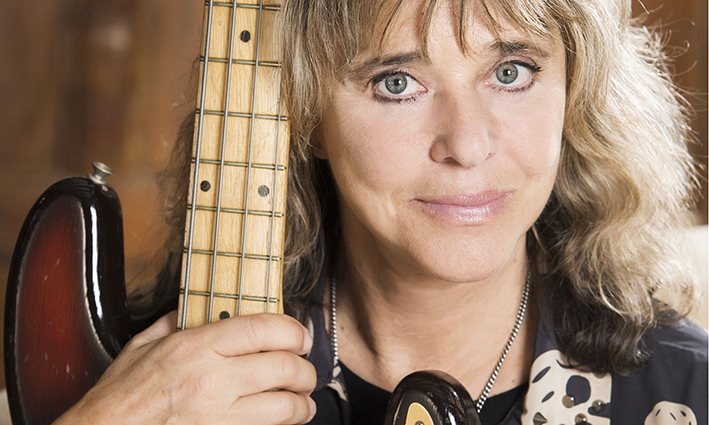 Suzi Quatro The Devil In Me

‘I won't retire before I turn around, shake my ass and there's silence.’

Rock’n’Roll Queen, Suzi Quatro releases her new album ‘The Devil In Me’

Suzi Quatro is unstoppable. I call her at 4pm on the dot and she picks up on the second ring. Punctuality has been the key to five decades in the public eye. That and the gym; her onstage gym.

So, how are you Suzi?, “I’ve got a blockage in my ear and I have to go and see my doctor about getting this wax out. If you put a Q-Tip down there and shove it too hard it can be really nasty. It drives me crazy because it makes me feel like I’m hearing things underwater.”

It’s not all bad news though…Suzi has just released a new studio album, ‘The Devil In Me‘: I’ve literally been so creative during this lockdown and while this mood of mine is still there I think I might even write another album’.

‘I can’t stop. I’m picking things out of the air and whilst this is here I’m just going to keep going. The title song wasn’t actually an homage to Devil Gate Drive – it’s more something that my mum told me and she very much was the focus for this song.”

‘Starting spring 2020, almost one hundred of my shows were cancelled and my son Richard (Tuckey) would also have been on tour with his band had not all his concerts also been cancelled or postponed. So I said to him: ‘We should make the most of our free time, write new material and allow ourselves to be inspired by the things that are currently going on in the world.’ I already knew that Richard and I make a brilliant team, after all ‘No Control’ had been a major success and a very special recording for us. Although I would never have thought that we’d be able to surpass it. But everybody who’s heard ‘The Devil In Me’ and all the people who had worked on the previous album have told us: ‘This album is even stronger!”

Suzi, now in her 57th year of writing and performing, certainly knows what she’s talking about. Since the beginning of her career as a 14-year-old singer and bassist she has achieved almost everything a musician could possibly hope to achieve. Her charismatic voice, her powerful low slung bass style and global hits such as ‘Can The Can’, ’48 Crash’, ‘Devil Gate Drive’, ‘If You Can`t Give Me Love’, ‘She’s In Love With You’ and ‘Stumblin In’ made her a rock music icon and Top Of The Pops regular in the 1970s. To this day, her motto is: “I won’t retire before I turn around, shake my ass and there’s silence.”

That moment is still a long way in the distant future due to ‘The Devil In Me “being made in a little studio at my house. Richard was in the studio working on ideas, I was sitting on the patio, relaxing, and heard these absolutely beautiful tracks coming out of the open studio door. I’d add a bass line, with a sparse guitar chord, and drums. It was immediate for me. I’d run into the studio, mask on, of course, it was like a magnet. I would ask him: ‘What is this?’ Set up a microphone, and go “Quick, quick, quick!’ And without thinking, without writing anything down, I would sing the first few lines of the song exactly as they ended up. That’s when you know you have a great song.”

We are now running late, so I put on my old Smash Hits hat and rattle through The Big Questions:

A: Who is your best friend?
S: My Mum Helen. She really knew me and understood me, never stopped me doing anything that I wanted, and would always say to me: Susan you are the shyest of my five children but you are also the one with most mischief” the imagery of which inspired my biggest hit Devil Gate Drive. She’s not here anymore sadly.

A: What was your biggest fashion mistake?
S: When I arrived in England my producer Mickey Most picks me up in his Rolls-Royce and said to me: “you’ve got yellow hot pants on Suzi, please get in the car really quickly.”

A: What was your worst telling-off for?
S: One time when I was at Catholic school I was chewing on a piece of paper and the nun came up to me and sent me out of the class because she thought I was chewing gum. She won’t even let me tell her that I was chewing paper. Pretty horrible memory that I got told off for and never forgot it.

A: What is your most prized possession?
S: That would be the original bass guitar that my father gave me. It was a 1957 Fender Precision bass guitar. He gave me that when I was 14 years old and it was my first bass. How lucky is that? It was his guitar but I told him that I was starting a band. “So can I have it?” so he gave it to me and none of the other girls at my school had anything as great as that guitar. So I say that it was written in the stars that I was going to be a serious musician.

A: When and where were you happiest?
S: I honestly think now, because I am at that time in my life which I am not answerable to anybody. I’m in a great partnership with my son who plays on the album, which was unexpected, and I’m able to see myself through his eyes and see my fire which is strange because I’m coming out this music like it’s all brand new again.

A: When did you last cry?
S: I’ve lost a former boyfriend to covid, someone I went out with a long time ago. I’ve had the illness myself back in November. It was a ten-day journey and for the first 5 days I did nothing but sleep and had a horrible headache and my appetite went but then I slowly got better. I’ve had the first injection and I got the second one the first week of April. I certainly didn’t get it as bad as some. I am actually pretty fit and it is a respiratory illness really so I’ve been singing on stage with a guitar around me for 57 years so you can imagine how much I’ve exercised my lungs. The NHS have worked tirelessly and I’ve been absolutely incredible with the vaccination rollout. It would be really nice to give a little back and do a charity show for them when we are able to. They’ve been amazing. because I can’t be out there I’m really connecting with people right now a lot on social media and one time a day I do a daily post. And one day I posted ‘depression don’t come knocking at my door.‘

A: What’s the best thing about being the age you are now?
S: When I turned 70 I thought wow it’s nice to be comfortable in your own skin. And to not rest on your laurels I was actually going to have a birthday party in Hamburg organised by my husband but it had to be canceled.

A: What’s the best advice you would give?
S: Definitely follow your heart that’s what my mum always told me.

A: What’s your biggest regret?
S: It was not travelling back to Texas to see my dying mother after Mickey Mouse the producer said to me don’t go you can’t handle it. And even though I spoke to her many times on the phone during those last days I couldn’t work out if I should have or could have got back to her in time.

A: What makes your heart sink?
S: There was definitely a sinking feeling about what happened to America during the Trump administration.

A: Where do you feel most at ease at this stage of your life?
S: I love the English countryside but whenever I go back to my home city, Detroit which is getting incredibly gentrified now they are re-generating lots of the city I always go back to the house that I was brought up in.

A: Who would you invite to a dinner party, dead or alive?
S: Jesus. JFK. Churchill. Tallulah Bankhead. And Marilyn Monroe.

A: What’s the book or record that changed your life?
S: The book would be Lord Of The Flies. The record that change my life was Stuck Inside of Mobile with the Memphis Blues Again by Bob Dylan on his Blonde on Blonde album which is the greatest album ever written.

A: What do you never leave home without?
S: Definitely my house and car keys as I own a PT cruiser a crossfire convertible and a Mercedes.

Suzi is planning a UK tour April 2022. Suzi Quatro The Devil In Me album, tour dates, ticket details and links to follow Suzi on social media can be found on her website suziquatro.com