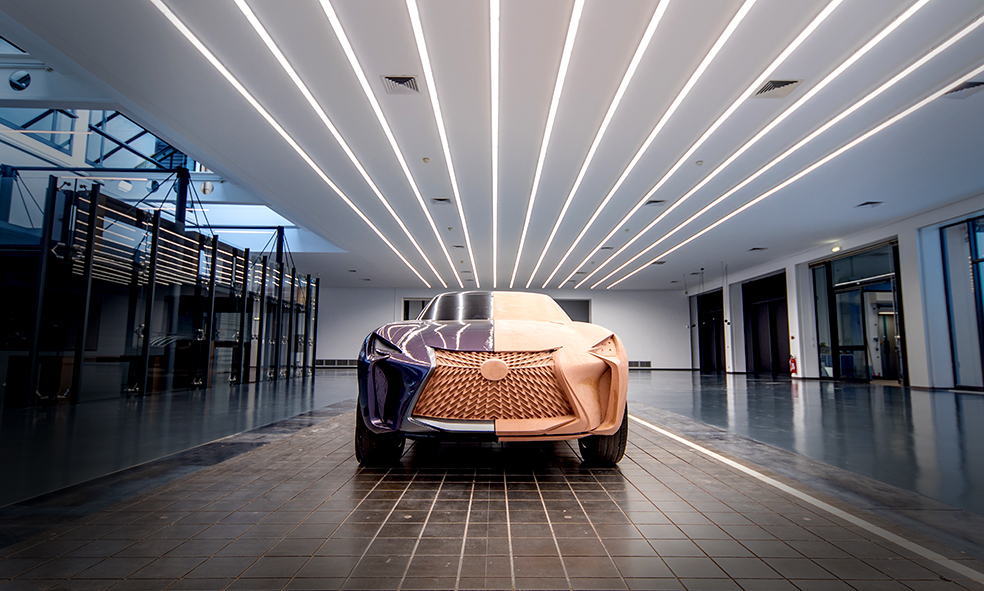 Designing Lexus, a look inside the Lexus design studio ED2

A rare invitation inside the secretive Lexus ED2 design studio

Back when traveling to the South of France was a lovely treat, seemingly no more impossible than a visit to your local dealership, we were kindly given a rare invitation inside the secretive Lexus design studio, ED2, hidden behind high walls in the hills above Nice. ED2 is an advanced department of the Lexus and Toyota global network of R&D studios. Along with everyone else, including the employees, we handed over our phones on entering the building.

Every car on the road has been designed, although some may appear not to have moved far from the lump of clay the designers started with. Few are given the meticulous care and attention the Lexus design team lavish every inch of their cars. A process which they call L Finesse, its as much about the Japanese, Takumi – skilled artisan craftsmen – as it is about the whole experience of the car. From approaching it, opening the door, driving and then leaving.

Visiting from Japan, Suga-San, Head of Lexus Design International explained the driving force to the creative thinking – Takumi craftsmanship, imaginative technology, an engaging driving experience and brave design. The designers strive to find balance and combine opposing elements in harmony through what they call the ‘Yet’ philosophy. Powerful yet Fuel efficient – Strong yet Agile and so on. Suga-San passionately explained ‘Omotenashi’, a Japanese word that simply translates as ‘good hospitality’, but the meaning extends to the ancient Japanese concept of anticipating the needs of another even before they know them, a value at the core of Lexus.

Lexus have always followed this ‘Omotenashi’ approach with a wide vision for their design. Back in 1989 they opened a design studio in Brussels, called EPOC, placed to expand creativity and give a European perspective to the brand. In 2001 they extended their European links, building ED2 in the south of France from the ground up to provide the perfect creative environment. A large airy, design studio is walled with glass looking down over stunning views of the Côte d’Azur. The light sparkling on the Mediterranean and flooding the studios is the same that drew the likes of Matisse and Van Gogh here and it’s perfect for choosing colour, materials and finishes. And sometimes it’s just easier to let your imagination run wild when your not right under the nose of the bosses back in Japan.

Californian, Ian Cartabiano leads the ED2 studio. His enthusiasm and life long passion for cars is infectious. He explained ‘there is an open, no rule policy to ideas in the studio’ and his small, but highly creative team makes a large impact on the Lexus range. He encourages the designers to ‘ have the courage to stand out and defy convention’ and to ‘do what ever it takes’, although looking around the studio littered with scale models and piles of material samples, it appears most innovations actually start with humble pencil and paper. Designers sketch out ideas, reworking again and again every nip and tuck of the sweeping exterior and every minute detail of the interior. These concepts are transferred to 3D digital modeling where the designers can move around and even sit in, virtual cars using VR goggles. The chosen designs developed with physical mockups using 3D printing and the hands of craftsmen sculpting clay models.

A full size concept, re-imagining the new Lexus UX sat under spotlights in the conference hall demonstrating how far the designers’ imaginations can push the limits of a car while respecting the vales of Lexus design. There is a harmony of materials and like Japanese architecture, these are used to blur the boundaries between inside and out as the forms and finishes flow together around and through the car. The front seats are constructed with a light lattice of leather straps woven over an open framework, somewhat even opening the boundary between the back and front of the interior usually created with solid seats.

You may also like to see our review of the Smart car. A clever car that made us as happy as children at christmas! Read it here