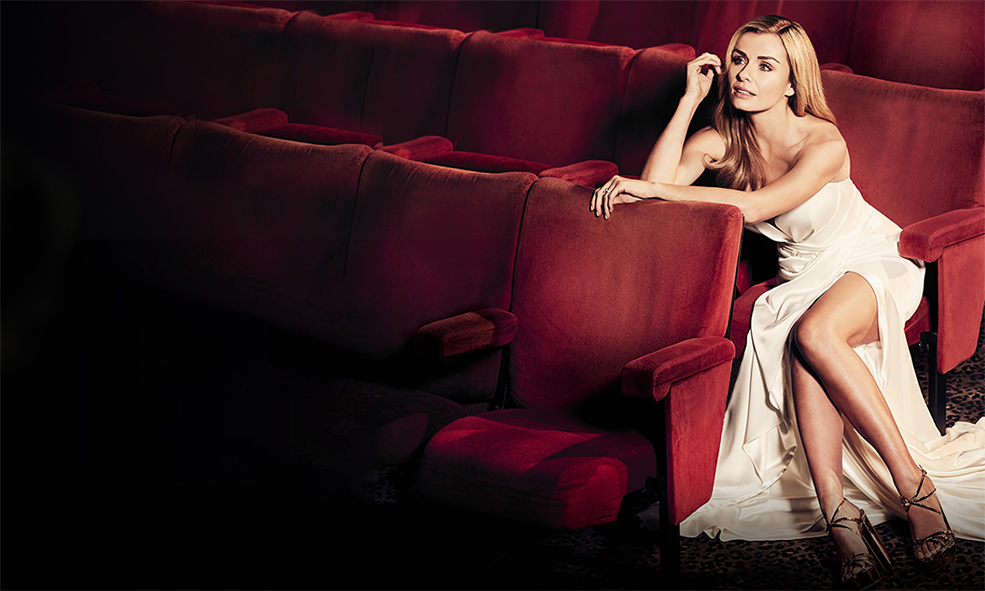 Katherine Jenkins celebrates iconic moments of cinema with a beautiful new album and is about to star on the screen herself. Before social distancing, when an evening out at the cinema was a simple pleasure in life, Andrew Threlfall got a chance to sit down and chat with Katherine.

Katherine Jenkins OBE is the biggest selling classical artist of the century. In July she released her 14th studio album, ‘Cinema Paradiso.’, reaching the number one spot in the classical charts. The album is a beautiful collection of songs from iconic moments of film including classics from Breakfast At Tiffany’s, West Side Story and even Schindler’s List as well as more recent favorites such as ‘I’ll Never Love Again’sung by Lady Gaga in A Star Is Born. Katherine first sang the song in an unlikely setting, disguised as an octopus in the television competition The Masked Singer. It was richly praised as the best performance of the series.

A tour following the album is optimistically planned for early next year. Tickets are available here: katherinejenkins.co.uk

Katherine continues her love of the silver screen as she makes her debut film role in the upcoming Minamata, directed by her husband Andrew Levitas and due to be released in February. Katherine stars alongside Johnny Depp and Bill Nighy and also co-wrote the title track with Skylar Grey.

Andrew Threlfall got the chance to have a chat with Katherine.

A: Weren’t you also quite a bit of a mad partying student?
K: Er, yeah, I was that (kind of) student.

A: What did you think of your fellow countryman Charlottle Church who seemed to go through a phase of always having a drink and fag in her hand when she was in her early twenties?
K: Yeah, that’s what I was thinking too. When I first came to London I was living in the center, in Paddington near the Royal College of Music and it brought home to me how much people drink in this city. I never really had any training about how to cope with the record industry and the media interest in me. I was asked to consider doing Playboy for a million quid but my Mum would have been so disappointed in me if I had done it.

A: Was there anything else that was an absolute no-no?
K:  I would never have applied to take part in The X Factor and especially as I always had a plan in my head how to get there (to the top). You have your more extreme versions in the classical world like Charlotte Church or a more mature singer like myself.

A:  Could you have handled fame as young as when it fell to Charlotte?
K: Let me just say that I’m happy that it happened when it did because I had my head on my shoulders and finally I could appreciate everything around me that was happening. I do think it is a compliment to be compared to Charlotte and I won’t say anything nasty about her. In the past, people have tried to get me to say not-so-kind this about her. She’s more cosmopolitan than me though being from Cardiff. I don’t think I can give her too much advice.

A: What was the first record you ever bought?
K: It was Living In A Material World by Madonna which probably sums up how I’d always wanted to get a house in Los Angeles. I love the lifestyle over there. And I like it there because I feel incredibly healthy there; I’ll even get up and be in the gym at 5 in the morning. I used to stay in The Standard Hotel – a real rock and roll place and I was in a gym just down from there and it was nuts because all of the stars from that TV show Ally McBeal were in there. I love reading books like Hollywood Wives by Jackie Collins. You have to have something like that to get away from life although it has been suggested to me that it’s more like a porno movie than a book! I’ve never been charged with anything by the police had the way before you ask Andrew! (Laughs).

A: Why do you think you are so incredibly grounded?
K: My sister Laura is three years younger than me and she’s the clever one – not me – because she is into sociology. She’s my constant source of advice.

A: Is there another period in time you’d have loved to be alive?
K: I would love to have been a woman in the twenties – mainly because of the fashions – although it was harder to enjoy the sexual freedoms of the modern day.

A: What would the great British public be amazed to hear about you?
K: That my My Dad was going to call me Rory if I had been born a boy. It was one of his favorite names. Thank God I was a girl because I hated that name.

A: Any guilty pleasures?
K: I always sing ‘I Would Always Love You’ – which is my ultimate karaoke song. To me Whitney Houston and Mariah Carey have the ultimate voices.

A: What’s the best chat up line to ever?
K: “Was your father a thief because he must have stolen the stars from the skies and put them in your eyes? Speaking of which I always sleep with my eyes open. My eyes don’t close properly – they are always at least half open – and when I go to sleep I look like I’m still awake. And I don’t really have dreams either. My Mum would always say: “Katherine, are you awake or are you asleep?”

A: You really are from another age, even planet…..
K: Well I’m fascinated by the Titanic story and would love to have spent a day or two onboard. I heard of a company who were going to rebuild the Titanic and call it A Sinking Experience. They call it danger holidays and I really want to do the Titanic as soon as possible.
I’m a typical cancerian being very emotional and sensitive.