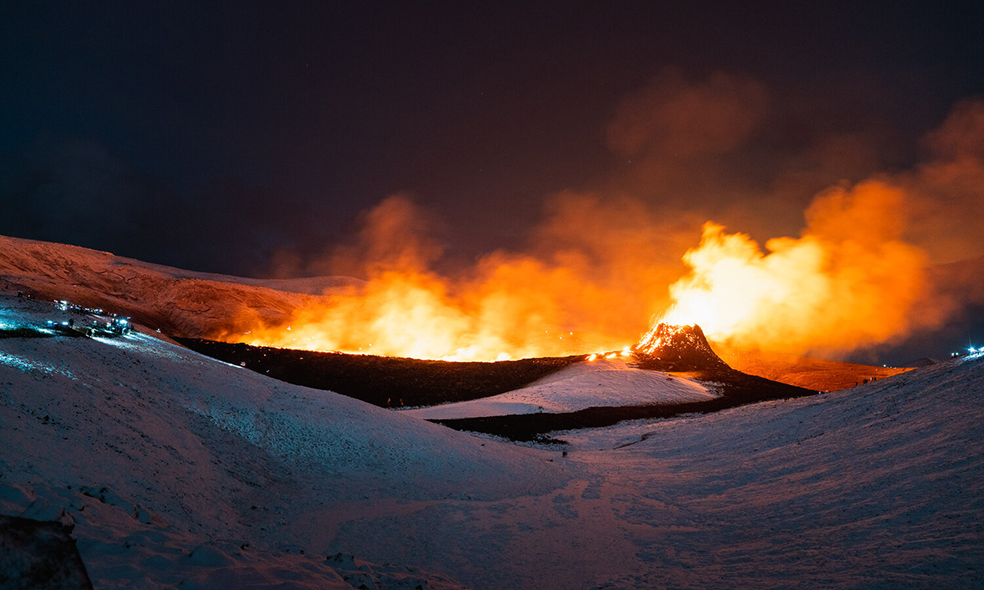 Iceland Volcano Eruption stunning drama is captured for us by leading Icelandic photographer Siggeir Hafsteinsson and Andrew Threlfall writes about his memorable visit to the last eruption that sent out a plume of ash bringing travel chaos to the sky’s over Europe.

Iceland Volcano Eruption sends rivers of molten lava into the icy landscape that can been seen from Reykjavik, 20 miles away..

You know those Carlsberg adverts right?

Well if Punk Rock did nature then it would always come down to volcanoes; the loudest, most riotous, disheveled look Mother Earth can give up. So we sent Siggeir Hafsteinsson, aka Sig Vicious, aka Icelandic graphic designer, turned photographer, turned location scout, turned lava addict up a volcano, hoping he’d come back, camera in one piece.

Siggeir has worked for clients ranging from Nike, MTV, Adobe, HP, CCP’s Eve-Online to telecommunications companies, but nothing excites and unifies the Icelandic people quite like volcanoes. (Instagram profile @sigvicious for his latest adventures and not-your-usual-Iceland).  I should know too. Because the last time this happened, 11 years ago, it was on a scale so seismic that only a subsequent pandemic could have wreaked as much havoc on airlines and flight activity.

Lava started to burst through a crack in Mount Fagradalsfjall on Friday evening, in the first eruption of its kind in more than 800 years. The site was initially blocked off, but from Saturday afternoon people were allowed to make the trek. Thousands of locals have now flocked to the volcano which erupted near the capital, Reykjavik.

To take stock of what’s going on, this week I revisited the article I’d written when the world last looked on in awe in 2010.

Maybe it was the cat. Admittedly he was gray, not a black, but he was the harbinger of bad luck all the same. Twenty-four hours after my meeting with little “Smoky” outside Reykjavik’s iconic Hallgrimkirkja church, the volcano went off. And for Europe, life really hasn’t been the same since.

I’ve been to Iceland three times now, and the “land of the ice and snow” (as Led Zeppelin describes the place in “Immigrant Song”) keeps getting weirder every time I visit. I suppose that the one constant is Iceland’s incurable, perpetual sense of impending meltdown.

I was there on July 31, 2008, when for the first and only time temperatures in Reykjavik hit 99 degrees Fahrenheit. I ate pizza and played baseball in the park until 1am. It was surreal and brightly sunlit — one of those typical Icelandic high summer days when day turns into, er, the next day, give or take half an hour of partial darkness. Very disorienting. Three months later I was back, and summer really was over, as the banks’ ludicrous attempts at impersonating Bernie Madoff started unraveling. The winter of their discontent is set to last an ice age.

And now here I was back in Reykjavik in mid-March, with the city doing what it had always done best: showing off its creative verve and tenacity as the comeback capital launched an inaugural Fashion Festival.

For a population of 300,000, Iceland has a lot to recommend it. No country on the planet seemingly has more artists, designers, published authors, and musicians per capita. Another local stereotype is open to debate, but I’m going to say it anyway: These Vikings are bloody good looking. Never underestimate the powers of an enviably attractive gene pool’s to persuade you that later and later late-night follies really are a good idea. Like driving out to an erupting volcano, for instance.

So there I was in a Reykjavik nightclub called NASA (appropriate, considering what impact the night was about to have on the stratosphere) at the Fashion Festival wrap party. News filtered through to this most glamorous of gatherings that a volcano has erupted a fairly short (and ultimately enticing) drive from the capital. While whale-watching is a celebrated local pastime, volcano-watching had an entirely novel allure. At least that was the contention of my co-driver Paolo and three giggling and ever-so-slightly merry models from the Eskimo Agency as we piled into our hire car and headed towards Eyjafjallajokull, a word so utterly unpronounceable that the girls simply giggled even more uncontrollably when they attempted teaching it to us. This seemed to take up the entire journey, I should add.

Nature had stolen a march on the sleeping authorities, and the roads were open. Minimal visibility wasn’t getting us far, so we wound down the windows, risking pneumonia in the process, and caught the sulfur trail on the breeze. And there it is, like a scene from One Million Years B.C.: steam, ice, snow, mist, heat, and that sulfur stench. Any moment now, Raquel Welch is going to run down from the hills in her rabbit-fur bikini while being chased by a Triceratops.

There is absolutely no getting away from it. An ejaculating monster of a volcano like Eyjafjallajokull (ejaculo-fellatio?) is something to behold. We stood transfixed as a dazzling magma-fueled lightshow strobed the fuming mists. It was like special effects for a KISS show. We finally left as daylight and the possibility of road closures sunk in. Back at the hotel, watching the eruption go off again on national TV, I smelled volcano on my scarf. I worried that the scent might set off the explosive-sniffing dogs at the airport, but thankfully they missed it.

Now I’m home again in West London, directly under the flight path of Heathrow, the world’s busiest airport. It’s been closed almost a week since last Thursday—no flights in or out since the second and latest set of explosions started. And you know what? Island races don’t cope very well without airplanes. Oh, Iceland’s doing fine—bar a couple of hundred locals who’ve been evacuated from the flood plain next to the volcano, the country has carried on daily business as usual.

But here in Britain, it’s chaos. As I write this, the British Navy is sending an aircraft carrier to pick up troops from Spain on the way back from Afghanistan. Two hundred thousand Brits are stranded abroad, and if that’s not bad enough, our fresh bananas and pineapples from West Africa have disappeared from the supermarket shelves.

And no, the panic hasn’t died down just yet. I know this to be true because the TV networks are playing Björk’s “It’s Oh So Quiet” over images of the volcano’s latest eruption. I Google “Immigrant Song,” and it turns out there’s a version by the Viking Kittens. Maybe some relation to the girls in the rental car on that surreal night in Iceland when the earth literally moved.